Cannabis Potency Not Strictly a Function of Trichome Density 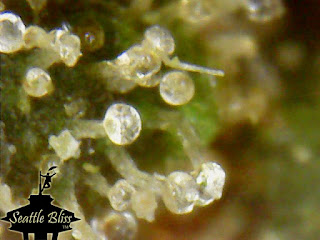 Trichomes are tiny globular or hairlike structures that grow on the surface of Cannabis plants. The "heads" may be either stalked or sessile (without a stalk), and they produce and store cannabinoids in these globular heads (Dayanandan & Kaufman, 1976; De Pasquale, 1974; Fairbairn, 1972).

Cannabinoids are the major molecules produced and stored in the trichome head (TH), such as CBG, THC and CBD (Flores-Sanchez, et al, 2008). Generally, THC is psychotropic, but the others are not. Terpenes are also produced and stored in these globular structures. Development of stalked, globular trichomes, where the majority of cannabinoids are found, is shown in the image below. 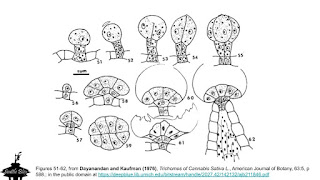 While enormous flowers can be fun, normal sized flowers may be the most potent. Considering two identical clones, one flowered under lights, and the other in full sun, both genetically grow flowers with a similar number of trichomes. However, because the outdoor plant’s energy source is so rich, bract size is much larger than that of the indoor plant. Dayanandan and Kaufman (1976) demonstrated this with a rich collection of images (References, below).


Any cannabis flower may appear ordinary to the naked eye, but take a closer look and you’ll see a crystalline forest of clear to white and amber trichomes. Trichomes should cover the entire surface of every part of the flower remaining from trimming. The closer to full coverage, the gentler the handling must have been. Less than full coverage means less than 100% of the plant’s trichomes (and cannabinoids) remain.

According to Turner, et al (1981), it is actually the number of trichomes that cover the cannabis bract and not trichome density that affects cannabinoid potency. This is to illustrate how identical plants grown side-by-side will have identical number of trichomes at all stages, but will exhibit differing trichome densities at different time points as bracts become engorged and ripen. Their study demonstrated that cannabinoid composition changed during the final weeks of flowering, but total trichomes and total cannabinoids remained the same.

The changes happening as flowers ripen include CBG enzymatically becoming THC or CBD, then either of those is oxidized by age, heat and light to form CBN. The progression is evident as total cannabinoids reach saturation in the TH and cause them to appear opaque white. This saturation is a signal for the grower to harvest. TH may become amber in color as some of the THC oxidizes to become CBN.

Most growers strive for THC potency above 20% because that’s what consumers demand. The greater the THC potency, the greater the wholesale price. Retailers buy and price their products according to the laboratory’s test report AND their own observations. Today’s cannabis retails from $3/gram bargain ounces to $15/gram and up for the truly rare or exceptional crops.
In each set of images below Trichome Density varies from one flower to the next, but the main difference among clean growers is handling. 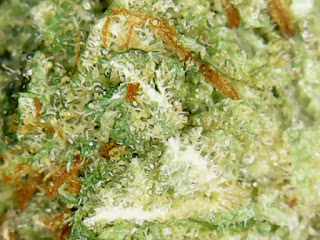 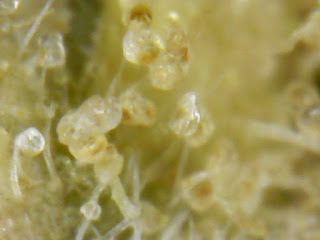 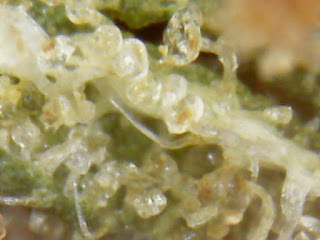 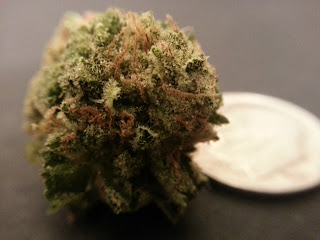 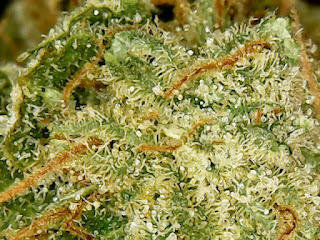 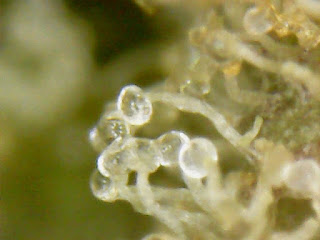 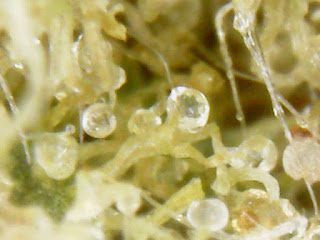 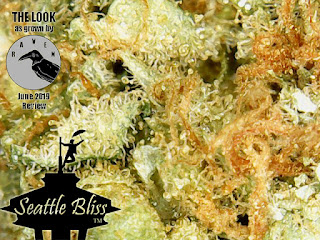 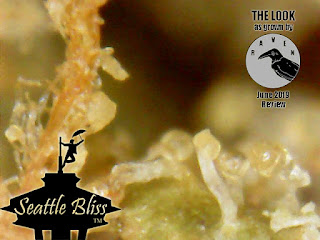 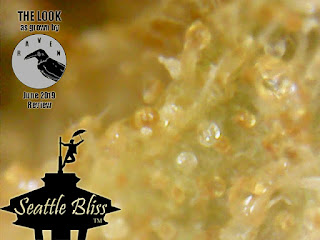 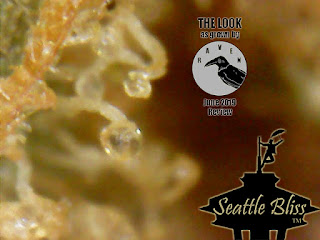 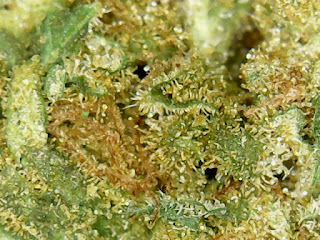 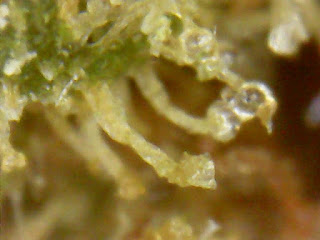 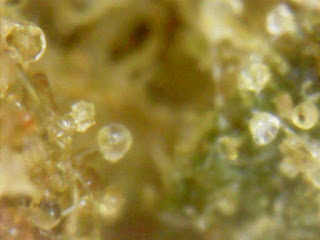 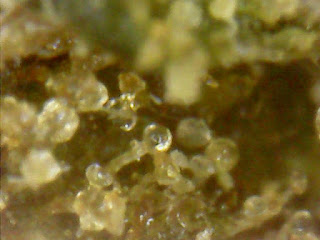 Now observe (click to enlarge the images above) how Trichome Density is greater with each specimen because of handling. Notice that some images have a high number of trichome heads missing, perhaps because they were knocked off by rough handling of drying flowers. Other images feature a product that is not over-dried or over-ripe, and handled with gentle care.

And now see the difference in the condition of these trichomes. The grower clearly invests greater care into their product as you can see their trichome heads are intact, large, full, and less than one-third amber in color. 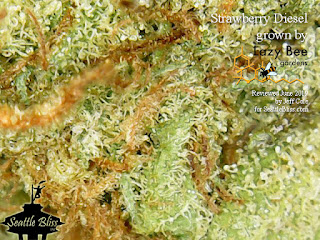 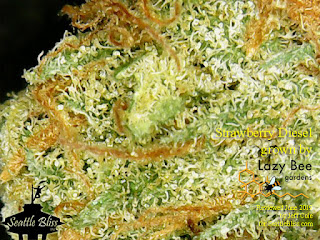 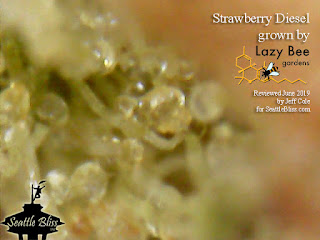 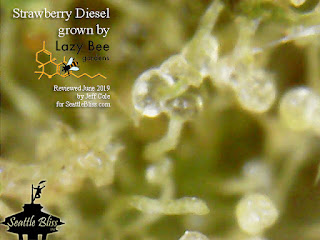 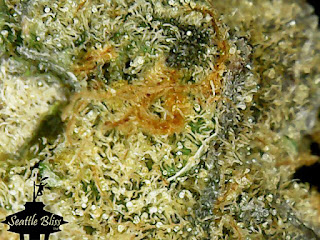 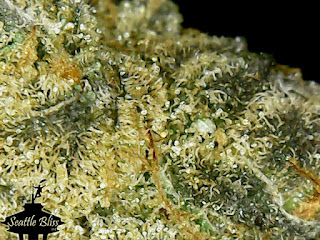 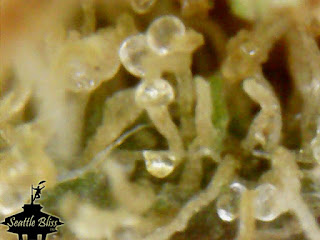 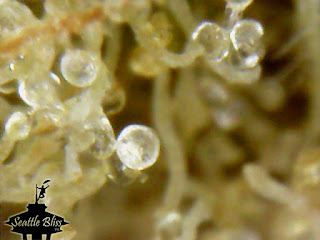 In summary, a cannabis flower swollen to ten percent greater mass by one additional week of cultivation, but with the same total number of healthy, capitate trichomes (those with heads intact), should exhibit less potency (mg THC per gram of cannabis flower). Outdoor flowers may grow larger than identical indoor clones, but are slightly less potent due to genetic limits placing a set number of trichomes on the surface of a bract.

Why do some prefer Outdoor cannabis? Some say flavor; others say a mellow experience is just what the doctor ordered. Exploration is up to you.

Explore your preferences by keeping a personal cannabis journal at HigherGround420.com. Tools and analyses of what YOU LIKE help you discover other sources and other strains you may like. Subscribe FREE by using GROUP_ID "Seattle Bliss".